The history of Young Mfg., Inc.

After returning from World War II in January 1946, Richard E. (Dick) Young came home to Grand Forks, ND to resume a normal life and find steady work. Dick found employment at a small local welding and repair shop. Only a short while later, the owners decided to dissolve their partnership and let it be known they wanted to sell the business and equipment.

In 1947 "Young Brothers Machine Works" was established. Dick, along with his brothers Roland and Frank, purchased the equipment for $7000 and set up shop in a rented building. Just as the business was getting started, it was nearly lost due to an interruption of the Korean War in June of 1950. Roland and Dick had both joined the National Guard and were notified to report for active duty. Frank, a skilled machinist, went to work for Minnkota Power Cooperative where he stayed until he retired. The equipment was moved into storage for the duration of the war. Upon return from their duty in Korea, Dick and Roland took temporary employment until they were able to build a 32 x 60 foot Quonset in 1954.

After one year, this endeavor ended due to a lack of funds. A local businessman and entrepreneur, Andy Freeman, the General Manager of Minnkota Power Cooperative at that time, asked Dick and Roland to join him and some other businessmen to form a new business to manufacture specialty items. The group formed ARCO, (which many believed was an acronym for Andy's Research Company) and was housed in the Young Brothers building. 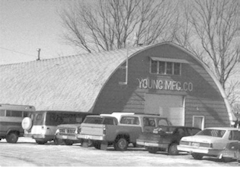 After eleven years with ARCO Dick and Roland decided to go on their own once again. The brothers were able to take a few pieces of equipment with them and in 1966; they purchased a horse training Quonset on a rutted dirt road outside city limits. After acquiring this new facility, the two brothers started to rebuild their business for the third time. This is where the business is located today, and now housed in a new steel building, at 2331 42nd street North in Grand Forks, ND.

In 1968 Dick and Roland made a trip to Arctic Enterprises in Thief River Falls, MN, hoping to find some tool and die work. They were asked to research a better way of producing the steel track cleats then used on Arctic Cat snowmobiles. A contract was awarded them to build dies for cleat production, and was probably the break they needed to propel their company into the business that it is today.

In 1973 Roland started his own business (TELPRO, INC.) to manufacture and sell a sheet-rock lifting device he designed for use in the construction industry, which he called the "PANELLIFT".

Dave Young, Dick Sr.'s youngest son, is President of the company today. Dave remembers as a young boy spending time at his dad's shop and began working there on odd jobs when he was twelve. Young Mfg., Inc. has expanded over the years from primarily tool and die and metal stamping to a complete metal fabrication facility that includes Laser Cutting, CNC Press Brakes and CNC Machining. The company employs fifty people and continues to have a strong customer base in the area.

Since the early years, the business has seen many changes and many positive results, including other family members who once worked at Young Mfg., Inc. and have left to start their own successful businesses.